How to Talk to Your Kids About 50 Shades of Grey 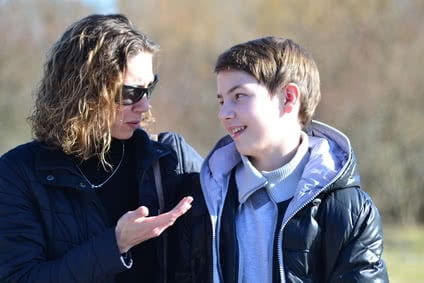 You might be thinking your kids don’t know about the movie, or haven’t heard about the books, but you will likely be wrong. With its Valentines Day release this weekend, 50 Shades of Grey is ALL over the media and you can be sure your kids have heard about it on the radio, seen the movie trailer, or heard about it from their friends.

My 12 year old asked me this week, “mom, what’s the big deal about 50 Shades of Grey? What is all that weird sex stuff about?”

Of course we were driving, and of course I was caught off guard, stammering for what to say. I stalled with a question to buy time, “What do you mean? What are you asking?” This bought a few more seconds to frantically orient myself to the conversation we were going to have, and he followed with, “you know, the S&M stuff”

Like with all delicate conversations with kids, I followed his lead. I knew it was harder for him to ask the question than it was for me to answer it, and all I really had to do was answer his questions honestly and at a level he could understand, keeping an eye toward what I wanted him to know, but without overly elaborating on things he wasn’t asking or perhaps wasn’t ready for.

I wish I had given this some further thought, but like with so many things in parenting, time and thought isn’t always on our side. The trouble is we don’t think enough about how to talk to our kids about sensitive subjects, and are often left unprepared, especially when it comes to sex. Here are a few tips on how to talk to your kids about 50 Shades of Grey, and some thoughts on why you might want to.

Get a Game Plan

Be prepared and know that they know – there is lots of chatter, and an impressive media campaign. Your kids might not know what it all means, but they have likely heard about it already, or soon will. Think through the main messages you want to convey. Have a few bullet points in mind. For me it was important to deconstruct the dangerous romantic notion that misogyny, or sexual violence are normal, or ever ok. Love should never ever hurt, and sex, when they are ready, is something to be enjoyed and cherished with someone who cares about and can respect you. Dominance, fear, and pain are not part of healthy love, Finally, they do not have to participate in these kind of activities to be cool, or to have a girlfriend or boyfriend someday – healthy relationships are always safe, consensual, and fun.

Listen for their conversations, and ask them what they know already. Don’t be afraid to fish around the subject – “are your friends talking about any movies lately? Or Valentines Day?” or ask directly, “I understand some kids are talking about a movie that just came out, 50 Shades of Grey. Have you heard about it? Have you thought about it?” Remember, Information is power and robs the secrecy out of its power. You have an opportunity to educate them about the truth – to not talk about it is to leave the education about this to your child’s peers.

This movie is about the devastating long term effects of sexual abuse and its replication. Sadomasochism is about using pain as a sexual stimulus, and is a major theme of the books and this film. While this kind of sexual activity can be enjoyable for some consenting adults, it combines sexual arousal with pain, and plays out a pairing that is sometimes established by childhood abusive experiences that combine the same. Because the brain is so pliable in childhood and lays down wiring for life, survivors of child abuse have deep neural associations between feelings of love and pain/fear. These associations can be so primitive that love doesn’t feel satisfying without pain and power. Not surprisingly, the books disclose that the main character, Christian Grey, was sexually abused as a child, and like all sexual abuse survivors learned early to pair his sexual arousal with pain, Here is the message children (middle schoolers and older) can hear –

“This is a movie is about a man who was abused as a child and has learned that love and pain always go together. He doesn’t know how to feel love for a woman without wanting to hurt or dominate her, just as he was dominated and hurt as a boy. Many people that engage in this kind of sexual activity have had early, abusive sexual experiences where pain was mixed with pleasure in such a way that they don’t know how to love someone without wanting to hurt them. He is confused, and he is lonely.”

Some say the movie is about love and the romance of being so drawn to a person that you will do anything to be with them. The main character is a successful desirable man, who lavishly “courts” the woman in the movie. He is handsome, wealthy, and in control. She is trusting, lacks self confidence, and vulnerable. He is drawn to her vulnerability, her beauty, and her submissiveness. She is drawn to his confidence, his wealth, and the attention he pays to her. He is powerful and can take take care of her – she so desperately wants him to. She does not recognize the warning signs of how dangerous this relationship could be to her. Here is a translation that kids can hear –

“Romance is about love conquering all faults and evils. The man in the movie cares about the woman, but can’t help but want to control, scare, and hurt her, because this is how he has been taught about love. She believes that he loves her, and in spite of his hurtful behavior, she believes she can help him change if she loves him enough, and participates in his games. As if she was in a fairytale, she is lost in wishing things will happen that probably won’t, and is blind to the risks she is taking. The movie lets us think that it will all be ok in the end – like so many fairytales teach us. However, by hanging on to this wish, she puts herself at great personal risk to let him continue to hurt her. And in spite of her longings for him to change, the reality is that he simply can’t. It is really hard to let go of our wishes sometimes, and especially when we love someone.”

So then my son asked, “well isn’t that rape when you hurt someone when you are having sex with them?” Good question. I answered yes, but went on to explain the difference, which is important.

“Even though this movie is about dangerous sexual acts, and pain, this movie is not about rape, because both of these adults are consenting. In other words, they have both agreed that they are willing to do this, even if it isn’t a good idea. Consent by an adult (over 18yo) is what stops these games from being considered a crime.”

“So then why do people consent when it is wrong or hurts?” was his follow-up question. Another tough question, that gave me a platform to discuss self esteem, misogyny, pressure to please, and relationship violence.

“Sometimes people consent to these kinds of activities when they don’t think they are allowed to say no, or don’t know how to. Other times, people believe what a person says about a risky behavior – that it’s fun, and they’ll like it. Many people can feel flattered to have someone’s attention who is successful, attractive, and interested in you. It isn’t that hard to find yourself in a situation where someone you really like asks you to do something you might not want to do, even if you are curious and feel conflicted. Remember that a healthy relationship always involves respect and care – you should never feel coerced into doing anything that scares or hurts you. A relationship, and the games that you might play within it, should never leave you feeling afraid, hurt, or ashamed. Period. If you find yourself in a situation like this, recognize the danger signs, even if you don’t want to, and protect yourself.”

Looking for more help in understanding anxiety as a parent? Learn more about my book Hack Your Anxiety and access free tools to help you manage the fear and anxiety going around the world today.